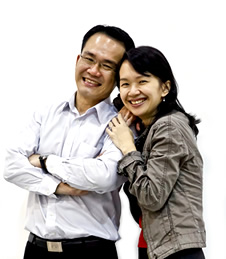 Poh Wee Long is a Team Pastor. He had a successful 13-year career in the Republic of Singapore Navy as a submarine combat officer before joining a private company in 2008 as a Consultant training Navy submariners. In 2011, he responded to the challenge to join FCBC as a pastoral staff in obedience to the full-time calling he received in 1997. His passion is to see “the earth filled with the knowledge of the glory of the Lord as the waters cover the sea” (Habakkuk 2:14) and the lost saved and enter into a deep relationship with their Heavenly Father in the process.

Cristabel Poh responded in faith to serve alongside her husband as a Team Pastor in 2011. She was saved in FCBC in 1993 and has been an active member, cell intern and leader since her encounter with God. She firmly believes that all believers can be fruitful in the Great Commission, because Jesus promised in John 15:5, "I am the vine, you are the branches, he who abides in Me and I in him, he bears much fruit, for apart from Me you can do nothing." Her desire is for everyone to know how much Jesus loves them and live in the abundance of His blessings. The couple is happily married since 2001 and has three children, Emmanuel, Enoch and Elizabeth.