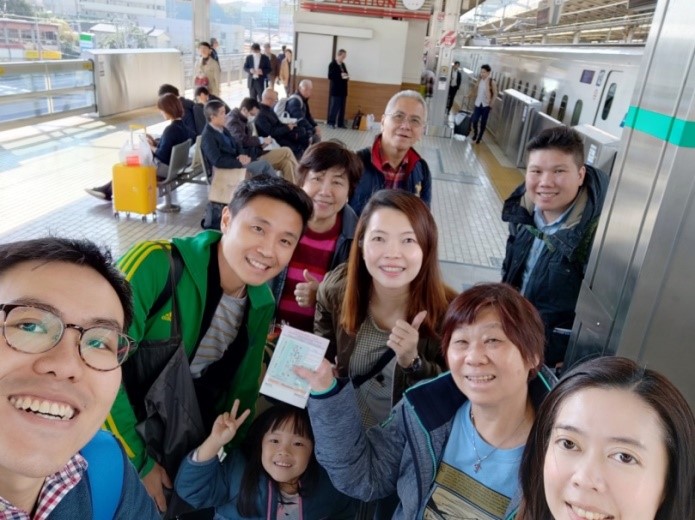 “Because I love Japan, I will not keep still. Because my heart yearns for Japan, I cannot remain silent.” (referenced from Isaiah 62:1)

This verse that was shared by Pastor Caleb during our devotion aptly describes our LoveJapan missions experience, which was the last trip of 2019. Our team of seven, most of whom had no prior experience serving in Japan, embarked on this exciting adventure to support FCBC Japan. We covered six cities (Yokohama, Nagoya, Sendai, Ena, Kesennuma and Marumori) in the span of nine days. Here are some of the highlights from our trip:

We ran a total of three XFXZ, one session each at Yokohama, Nagoya and Sendai. Eddie and Cindy introduced a drawing activity into the discussion on “When God comes knocking” to make it interactive. Margaret’s testimony was also creatively weaved into the discussion. Thank God many of the BEST were open to hear our testimonies and receive prayers. In Nagoya, one of the BEST even accepted Christ into her life at the end of the session! 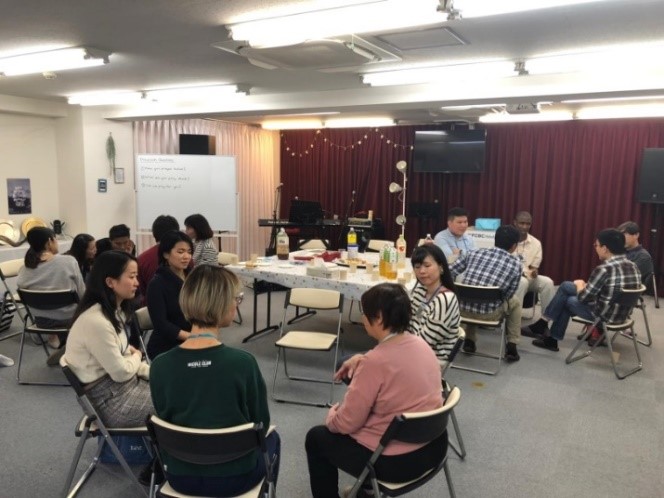 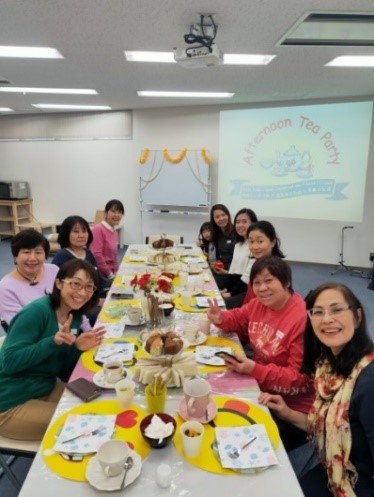 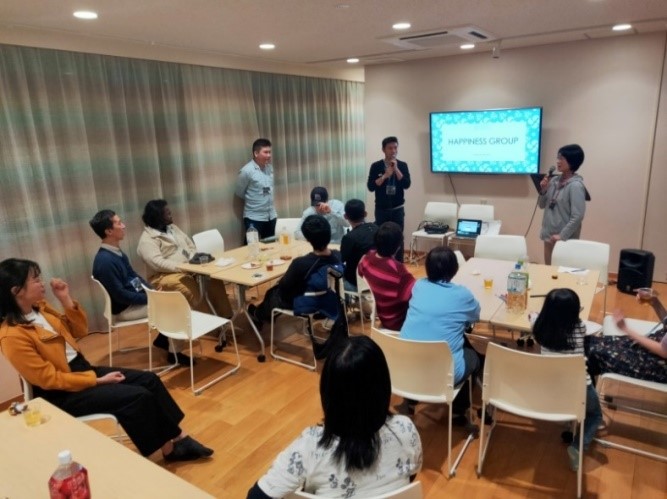 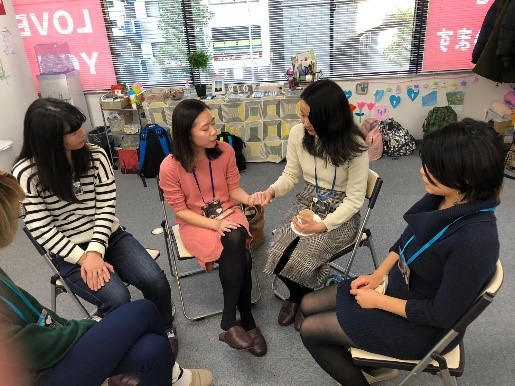 Praying for our BEST

Our team supported three FCBC services, plus an additional service at Kesennuma Baptist Church. In Kesennuma, we led worship and Ian, Sheng Wei, Margaret and Victoria shared powerful testimonies of how God transformed their lives and used them to bless others. In Sendai, a first-time visitor raised her hand to receive Christ at the end of the service. We also served as ministry leaders, to pray for many in the congregation that responded for prayers. 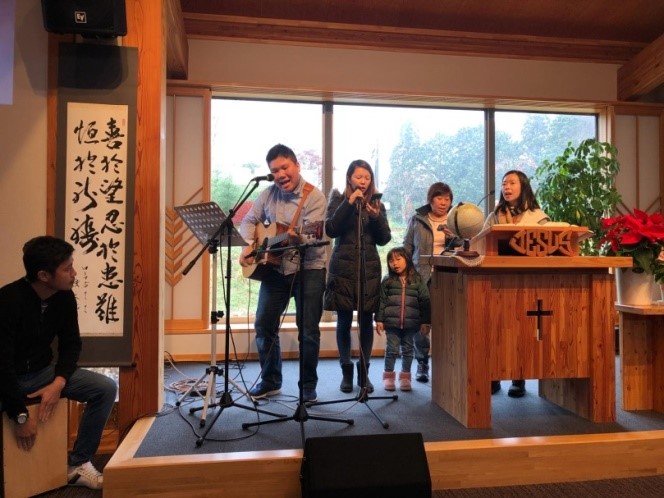 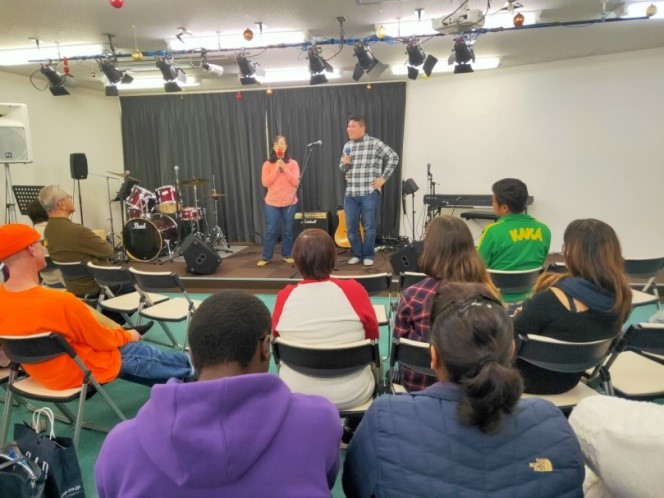 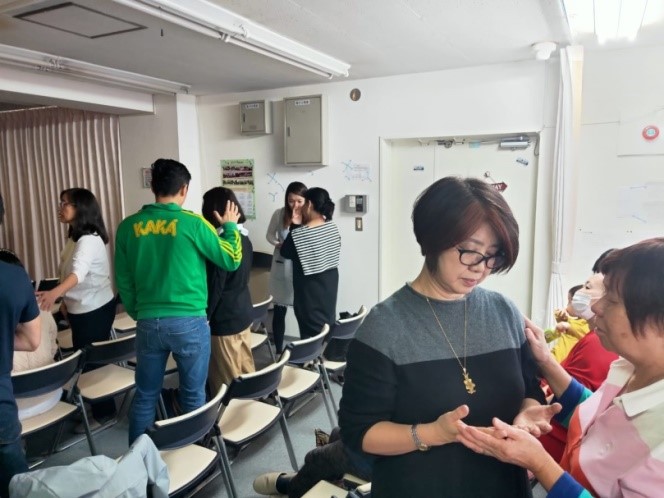 Leading worship in Kesennuma (top), Sheng Wei sharing his testimony in Sendai (middle), and praying for members in Yokohama (bottom)

Our team supported various marketplace outreach initiatives led by Charlotte, a Gideonite and Goi, a professor at a local university. Victoria, Ian and Sheng Wei joined Charlotte’s regular karaoke session to befriend some of the university students. We also went to the university to encourage volunteering, and visited a Senior High School in Ena to interact with members of their English Conversation Club. We pray that these initiatives will continue to open doors for the sharing of the gospel. 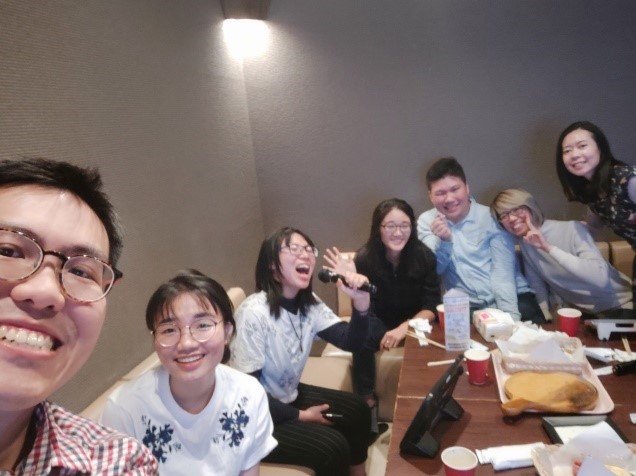 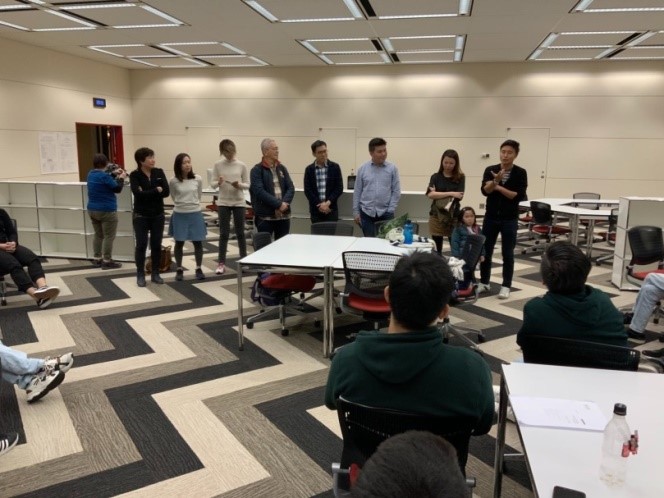 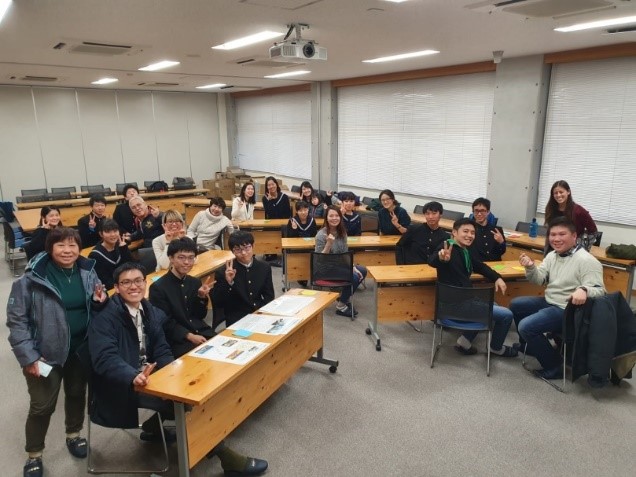 Marumori was a city that was affected by the recent Typhoon Hagibis. The extensive flooding damaged some of the houses and left behind several layers of mud. Eddie, Ian, Sheng Wei and Victoria volunteered at Marumori for a day. They cleared out mud and debris from the damaged houses. 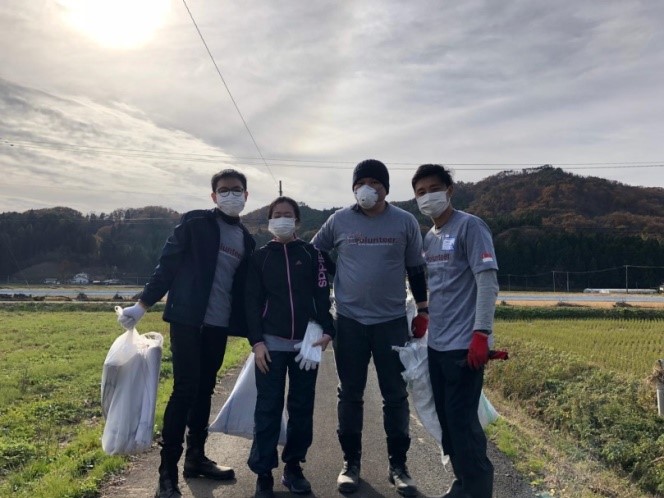 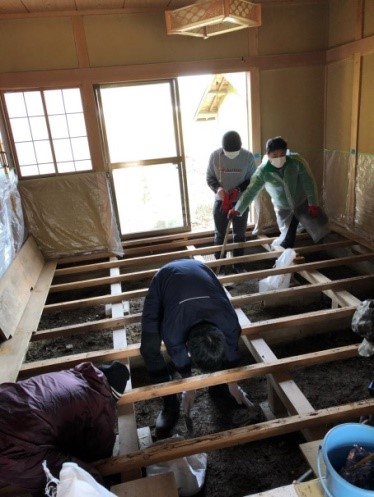 Eddie, Sheng Wei, Victoria and Ian masked up and ready to serve (top), clearing out debris from the affected houses (bottom)

We also supported Kodomo Shyokudo, a monthly soup kitchen started by Dream Centre in 2018, to reach out to the local community children in Sendai. Our “masterchef”, Margaret, prepared a sumptuous feast for almost 40 people. Sheng Wei led the icebreakers, Ian followed with a simple worship song, and Eddie shared his testimony and prayed blessings over the children. Thank God that the children have been returning every month, and we pray that they will continue to come back! 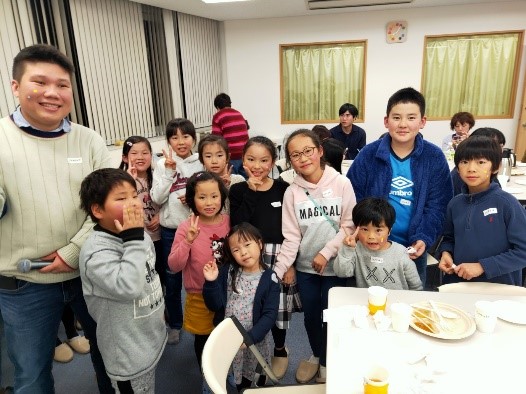 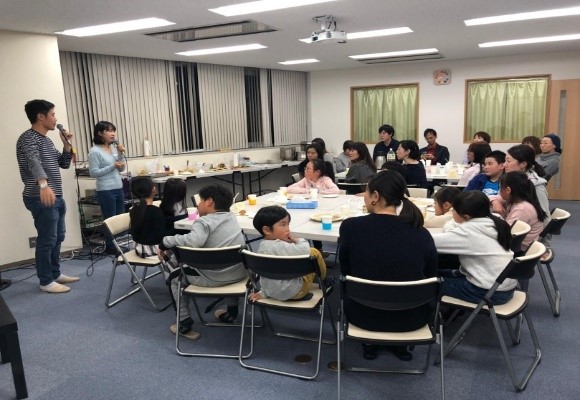 In Sendai, we supported Pastor Christina and Misa, a Japanese gospel singer, for a street busking session. We headed to a downtown shopping street in Sendai and sang gospel songs while giving out flyers to invite passersby to her concert at FCBC Sendai. Sheng Wei also prepared handwritten placards to invite the public to converse with us in English for fun! In Nagoya, we interceded for the city at a prominent downtown shopping area. We worshipped down God’s presence and declared that He will become Lord over this nation! 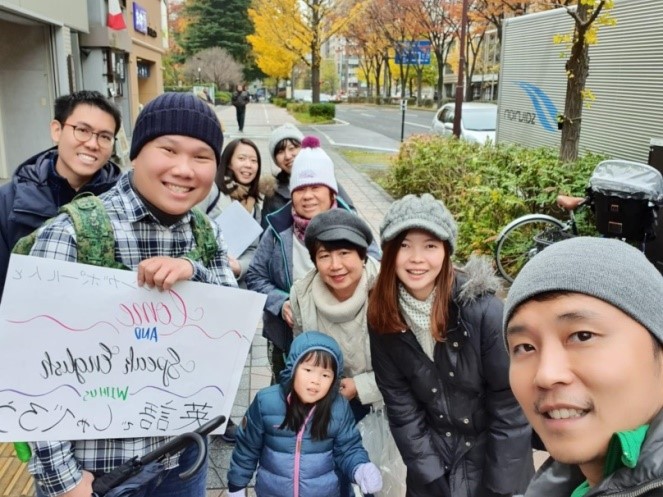 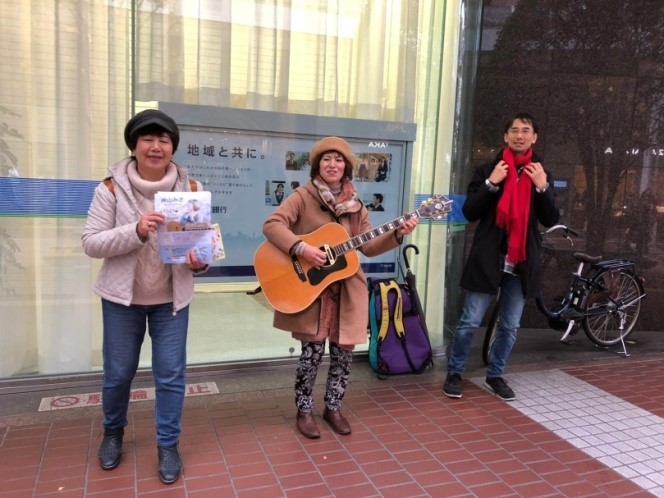 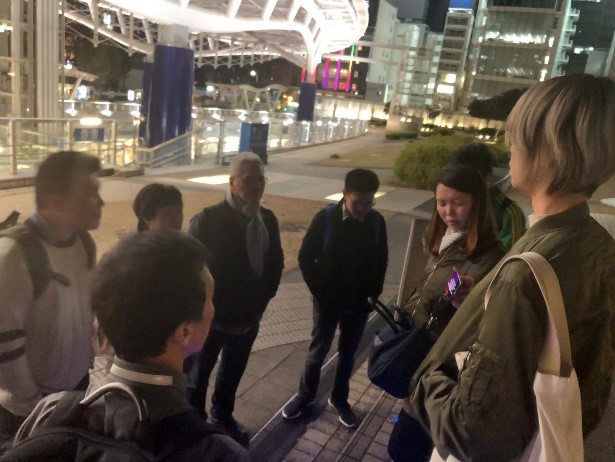 “This LoveJapan trip was an extremely wonderful experience of serving God and the FCBC churches in Japan for my family of three. I am very thankful for Pastors, Charlotte and Yuko for tirelessly serving and also hosting the team. The teamwork and synergy with the trippers was most heartening. Although we couldn’t speak Japanese, I felt that our hearts were connected while we ministered to the people as God’s language of love transcends the language barrier. I couldn’t have asked for a better experience than this as my maiden trip to Japan.” - Eddie

“Before the trip, I thought I was going there to serve and bless the Japanese, and support the Pastors and Gideonite there. However, looking back I felt that I’ve received more than what I gave! The seminar on the prophetic in Yokohama equipped me to move in new ways. In Nagoya, I had the privilege of leading a first-time visitor in XFXZ to Christ, which was amazing. In Sendai, I was most touched when a church member, Hisako, prayed for me and released a vision of Eddie and me having a second child, something we have been praying for! We were also blessed to celebrate our wedding anniversary with Pastors and the team. All in all, I am truly blessed and thankful for this opportunity to serve alongside everyone!” - Cindy

“I was wondering, this being the first time in five years that I’m back in Japan for missions, if I would still be relevant as a short-term mission tripper. I found this trip to be nothing short of amazing! The team worked together and found our individual places to contribute. 5-year-old Vera distributed flyers in the cold, while 65-year-old Margaret was cooking away. All of us tried to strike meaningful conversations with the Japanese, regardless of our language proficiency! I’ve been very blessed to see what God is doing at the various cities, and to serve via so many platforms, from children and students to housewives and even the elderly in Kesennuma. This trip was a good reminder of the synergy we can have when we’re like-minded and share the same heartbeat. I’m very thankful for this fulfilling trip and the new friends I’ve made!” - Victoria

“I thank God for giving me the strength to serve Him in this LoveJapan trip by cooking for the Japanese. Seeing them enjoy my Singaporean food made me happy. I learnt that while the Japanese culture seems resistant to Christianity, they are in fact warm, friendly and most importantly, hungry for something greater. The harvest is plenty but the workers are few! I hope that through the testimony I shared about God knocking on my heart’s door, the Japanese would be drawn to the greatness of God and that He has not forgotten them. I loved the Ladies’ Afternoon Tea Party where we had great fellowship. I pray that they may be able to see God’s love through Pastor Christina’s hospitality and love.” - Margaret

“This LoveJapan trip was an eye-opener to what God is doing in Japan, as well as the challenges faced by Charlotte and Pastors Caleb and Christina regarding the ground in Japan. But, it has been a blessing to serve alongside them and learn from their examples!” - Sheng Wei

“Thank God for the opportunity to serve in Japan with other FCBC members. Thank God for using us to support Charlotte and Pastors Caleb and Christina to be a blessing to the Japanese!” - Ian